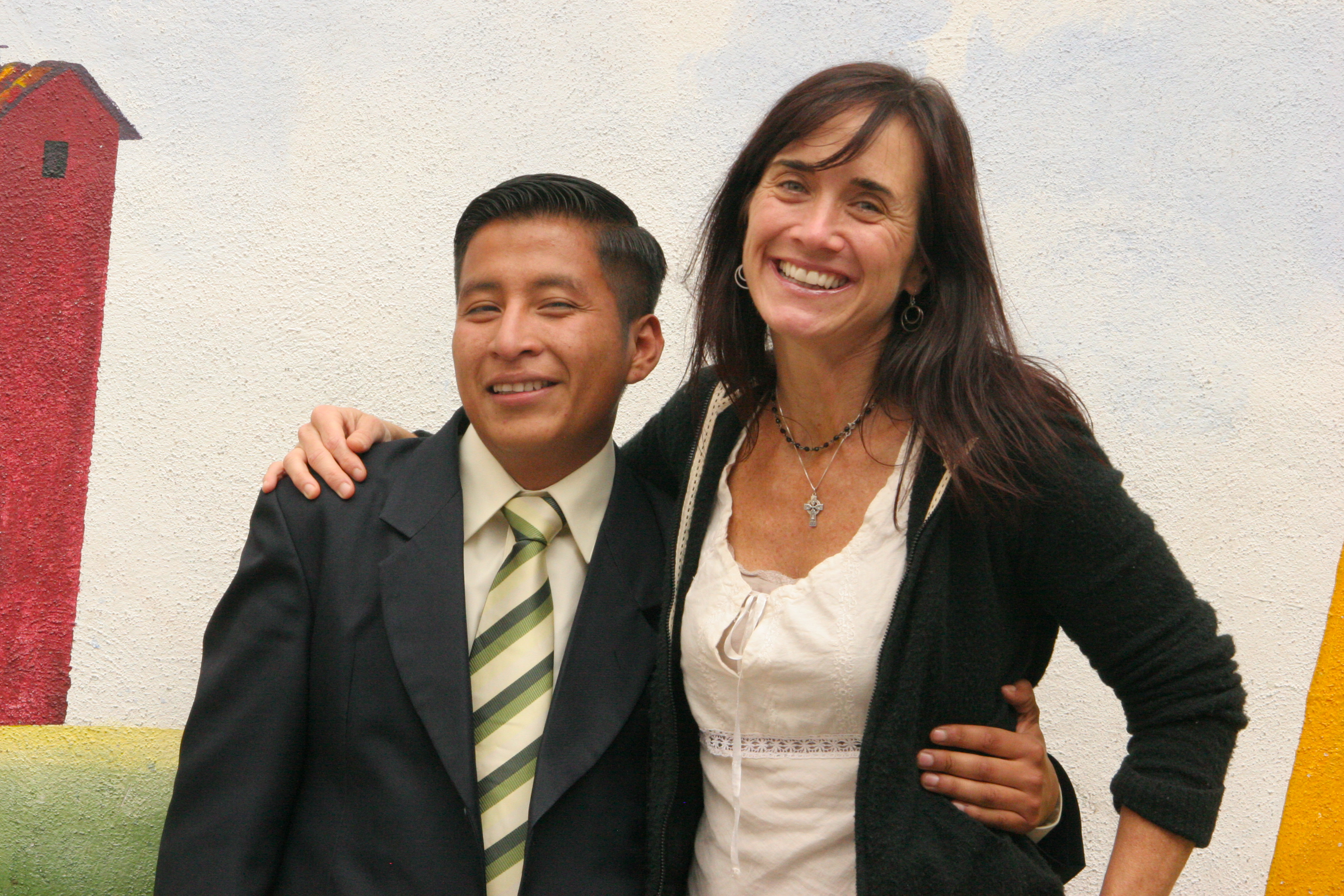 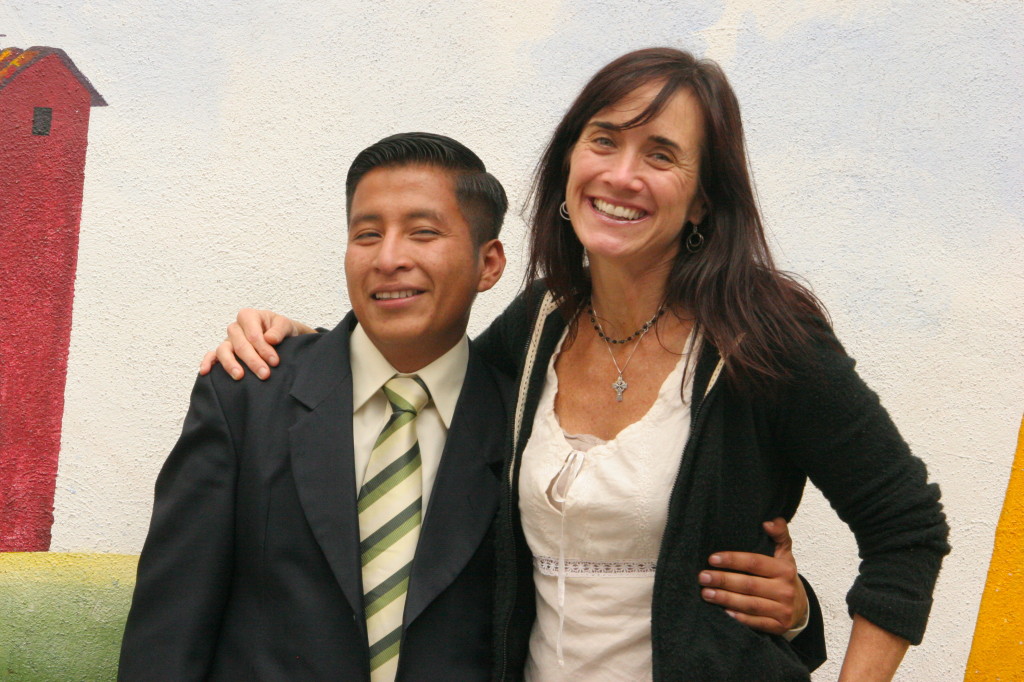 Many years ago, friends involved with Berea College in Kentucky were visiting our Education and Hope after school program in Guatemala.  Impressed by our work to provide academic scholarships to children whose families couldn’t afford to send their children to school, they encouraged me to look into Berea.  Berea College is unique in that it “charges no tuition and admits only academically promising students who have limited economic resources.”  Although Berea seemed like a wonderful institution, I wasn’t sure how we would be able to take advantage of this opportunity.  While our program has many extremely academically talented students, very few of them are proficient in English, much less with the level of English comprehension necessary for university study.  Still, our friends continued to send brochures from Berea as a reminder to keep the possibility open. 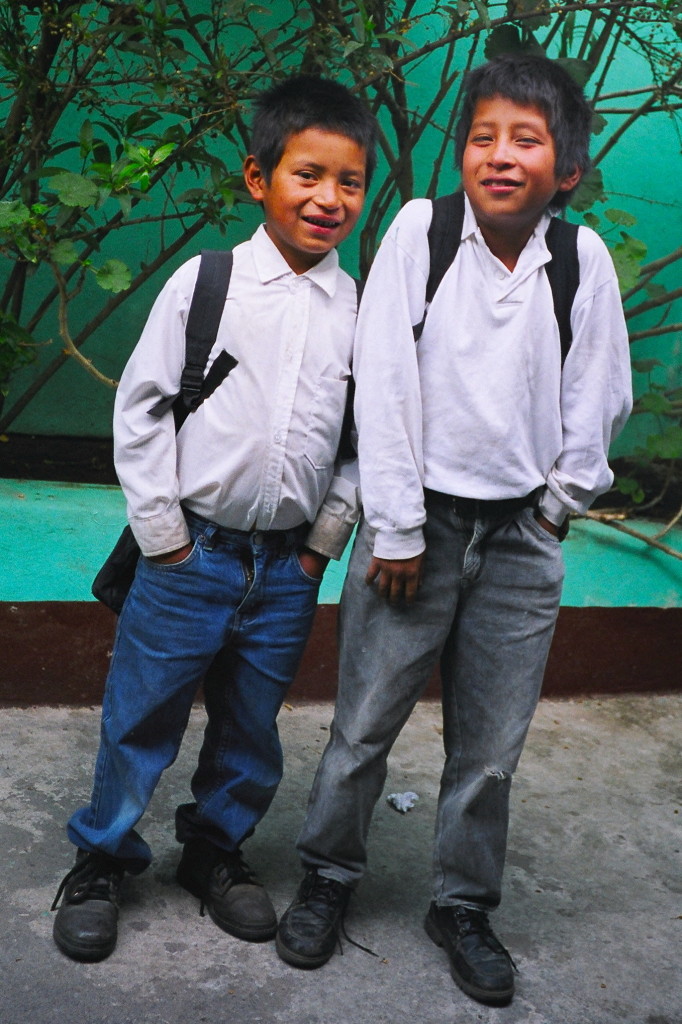 Jose Lucio Ixcoy  is a student I have known since he was a young child (he is pictured here beside his younger brother Juan in 1999).  I met his family in 1997 when I was a volunteer at a local women’s shelter, and Lucio was among the first to receive a scholarship from Education and Hope.  Lucio experienced a great deal of violence and abuse during his formative years.  As a result of this trauma, he struggled with behavioral issues growing up.  He seemed to always be getting into fights at school, causing enough trouble that we were worried he might be permanently expelled.  In a moving personal essay (included below), Lucio tells of a pivotal experience shortly before high school when he began to turn his life around.  Always a very bright student, Lucio went on to graduate from high school with honors in 2009, the highest GPA in his class.  After graduation he received a merit scholarship to study English in a competitive program, and then won two more scholarships to successive courses.  I was congratulating Lucio for his outstanding achievement when it suddenly occurred to me that he would be a great potential match for Berea College.  When I asked him what he thought about applying for admission to a university in the United States, Lucio’s jaw dropped to the ground! 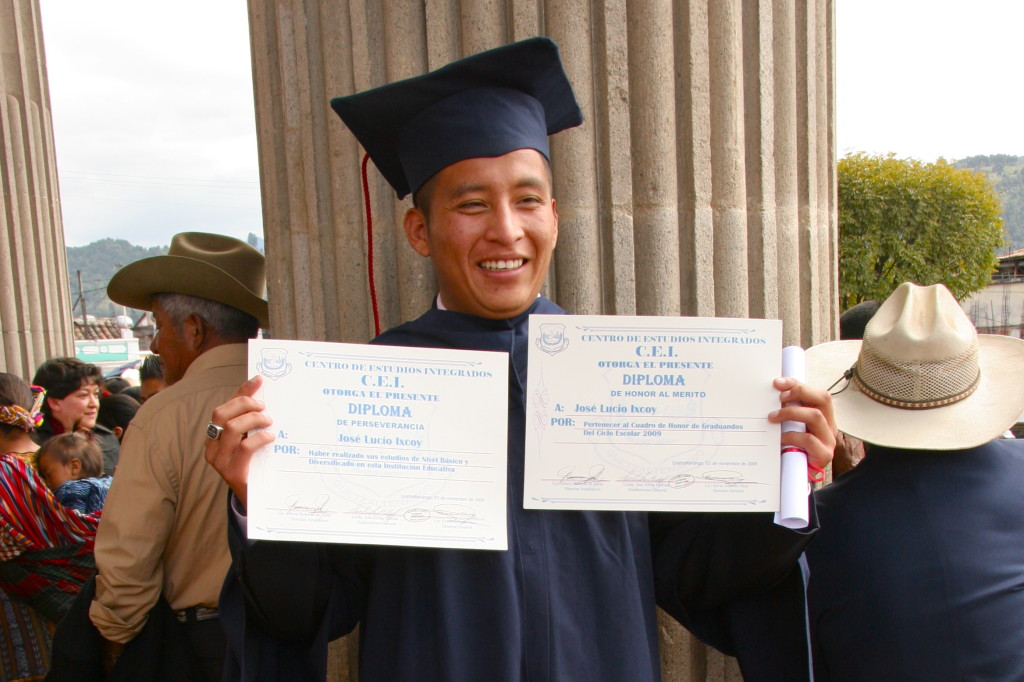 Lucio still had some work to do in order to be able to achieve Berea’s TOEFL (Test of English as a Foreign Language) requirement, and we made the decision to support Lucio through a full year of intensive English study.  Lucio was well aware of the serious financial commitment this represented for Education and Hope.  To reciprocate, Lucio offered his time during any available moment, first as extra help to our administrative staff, and then later on doing restoration work on our adjacent property.  On those days he would work all morning doing hard, physical labor, then shower, eat lunch and head off to class for the rest of the afternoon.  A willing and dependable volunteer, Lucio dug a 10’ x 10’ cistern for water storage, almost entirely by himself! 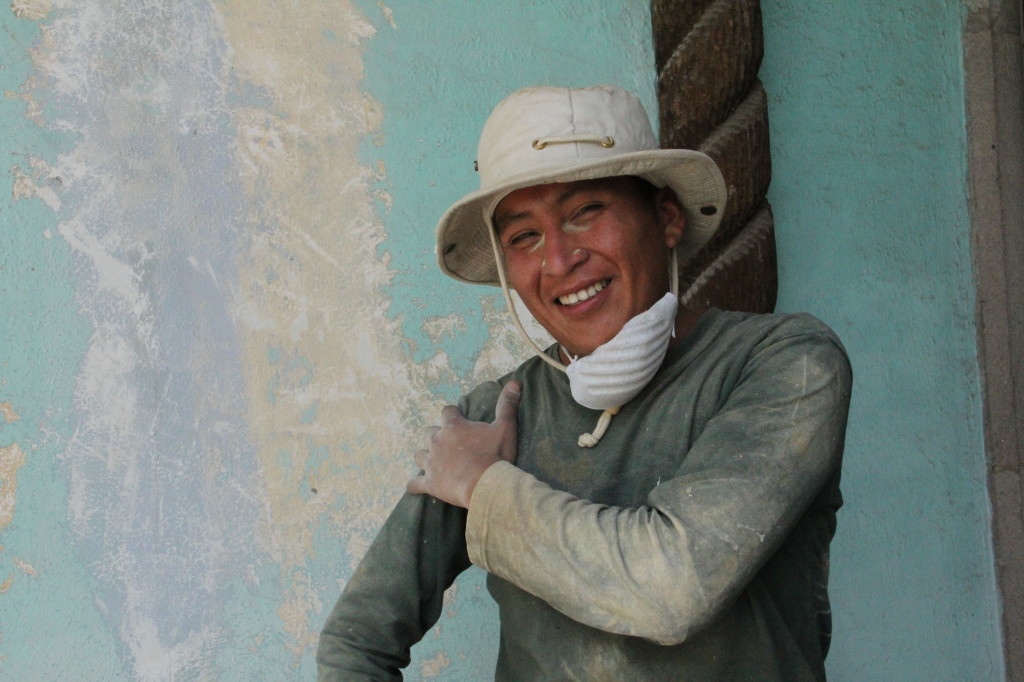 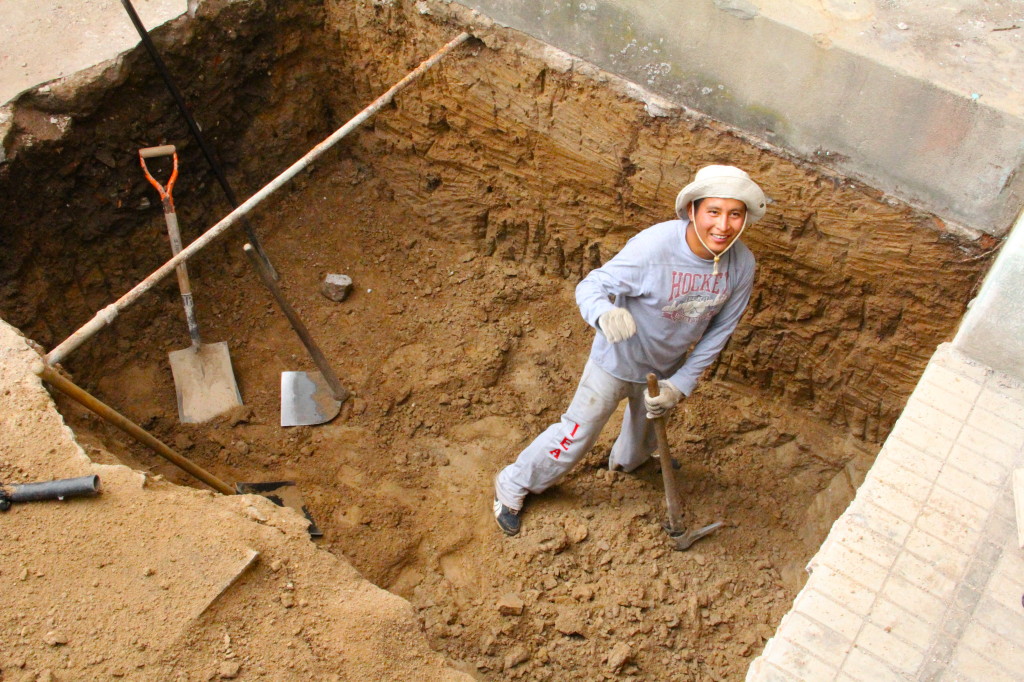 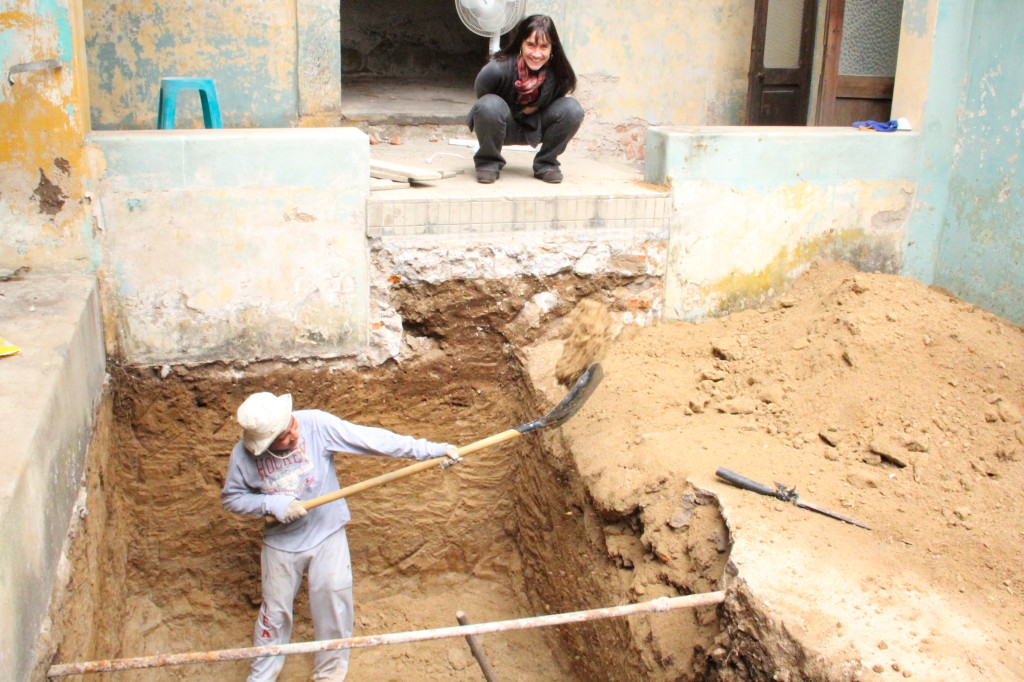 His application for the fall semester of 2013 was submitted in January, and in April we learned that Lucio was one of 33 international students accepted from a pool of over 400 applicants.  We are unbelievably proud of Lucio.  He is thrilled beyond words but when he found out on April Fool’s Day, he innocently thought the letter was some kind of prank!  This is what he wrote to me after hearing of his acceptance:

“I couldn’t believe it was true!  I was so surprised by everything I read that I wanted to cry and shout with happiness.  (I have to admit that when I was finally alone I did cry!)  My mind began to look back on everything that had happened to bring me to this point, how this dream had begun, how step by step I had slowly begun to work towards achieving this goal.  Today I can say that I feel like the happiest person in the world.  Thank you for everything, Julie.  Without you none of this would have been possible.” 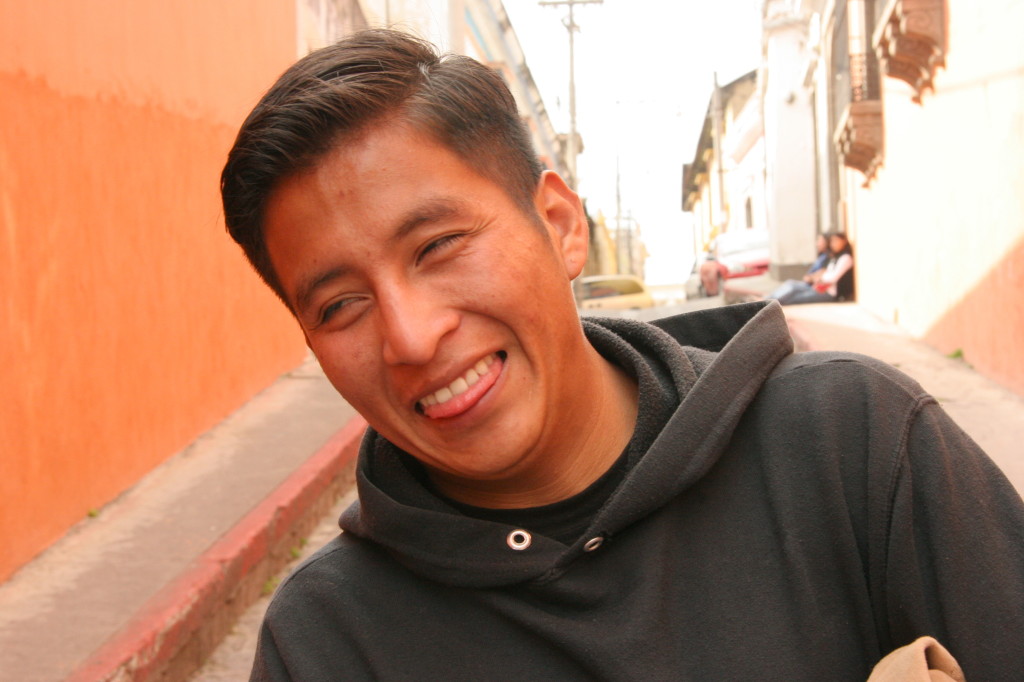 Heartfelt thanks to everyone who supports all the wonderful things happening at Education and Hope.  I often tell our donors that your gifts are helping to make miracles possible;  Lucio’s story is a very clear example of that!   If you have the time to read Lucio’s essay, I think you will be even more impressed with his achievement considering the obstacles he has overcome to reach this milestone.  We will be sure to keep you updated on Lucio’s progress as he heads to Kentucky in August to begin this new journey.

I was born in a small town in Guatemala called Momostenango into a poor family.  I am the oldest of four children raised by a single mother.  Immediately after I was born my grandparents forced my mother to return to work.  As a result of neglect I had serious troubles with my health from a very young age.  I suffered from bronchitis and tuberculosis and my mother was very worried about me.  I had to stay at home for many days at a time and that was a problem for me when I started going to school.  These diseases caused many medical expenses and my mother had no money to cover them; we could not afford the cost of a doctor every time that I needed to see one.

In addition to battling bronchitis and tuberculosis, I had serious issues within my family as well.  My mother had a terrible husband; he hit her, as well as my siblings and me.  She decided to escape and look for help but that was difficult for her.  For example, when my mother went to her parents’ home to tell them about the abuse, they told her that it was her problem and she had to fix it on her own.  Finally, when I was six years old, my mother escaped from that environment of violence and misery.  We went to Quetzaltenango, to a non-governmental organization called Nuevos Horizontes which helps women with family violence problems.  There we were able to start a new life.

When we came to Nuevos Horizontes we did not have any idea about what our future would look like.  The organization admitted women for up to three years so we stayed there.  During those years the organization gave us everything so we could overcome our situation. I started attending a public school and they helped cover a part of the expenses.  On the first day of school I was scared because the environment was new to me and I was frightened by it.  By the end of my second year in school our time in Nuevos Horizontes was finished and my family had to leave.  Although we did not know where to go, we started a life on our own- my mother, my siblings and me. I continued studying in a public school and my mother started looking for help for us because she wanted her children to have a better future.

In Guatemala it is difficult to find scholarships to attend school because there are not a lot of organizations that help children.  Luckily, when I was in fifth grade, my mother found Julie Coyne.  Julie worked as a volunteer for Nuevos Horizontes during the first year that we lived there.  After that she began a non-profit organization called Education and Hope.  This program helps poor children in Guatemala to receive a good education.  Julie gave scholarships to my siblings and me so we could study in a better school, and we attended her after school enrichment program.  When I became a part of Education and Hope my life changed in many amazing ways.  I now had a better educational environment (in Guatemala the public education system has many deficiencies); I had access to better nutrition; and finally, I had a better quality of life.

Although I now had access to a better environment I still had problems in school.  I was a bully and always picked on others, and I got into many fights.  I remember at the end of my seventh grade year, the coordinator of the school told me I would not be accepted back because of my bad behavior.  When she said that I felt like the worst person in the world.  I was worried about what would happen to me and I went to talk with the coordinator about what I could do.  The school accepted me back but with a lot of conditions.  I was grateful for my second chance.  I started behaving better and improving my scores.  I changed my attitude and with that everything in my life also had a transformation.  I became aware of all of the help that I was receiving from Education and Hope and I started growing up.  My change was so astonishing that I achieved the best grade point average of my senior class, and I graduated from high school with honors.

After graduating, I applied for and received a scholarship from EducationUSA to study English.  With those courses I started feeling comfortable with the language.  Then EducationUSA gave me a scholarship for two more courses because of my high grades.  During this time, Julie told me that if I wanted to study in the United States she knew about an opportunity in Berea College but I would need a higher level of English.  I began the difficult process of studying to take the TOEFL.  That process was the most significant in my entire life.  I never could have imagined that one day someone would tell me about an opportunity like this, and much less that this person could believe I was a good candidate to achieve this goal.  I knew I had to work hard, but that was not a problem because I really wanted to perform well and make everyone proud by achieving acceptance into Berea College.

When I finish my studies in the United States I plan to return home to Guatemala because I want to use all of what I learn at Berea College to better my homeland.  I hope to help Education and Hope so it can continue supporting more children.  I also want to create my own organization where I can help children from rural areas so they have the opportunity to go to school like I did.  Children in rural areas normally do not have that opportunity, and if they do, they only study until the sixth grade.  I want to help change this because I believe education is a right for everyone.

Everything above is a product of the many experiences in my life.  These experiences have given me the vision of helping others, and have led me to do community service and volunteer with the organization that helped me so much, Education and Hope.  I also visited a rural community and taught children how to plant trees and take care of the environment.  I used that opportunity to tell the students there about the scholarships that EducationUSA offers.  I feel satisfied to say that because of this five children have now applied and earned the opportunity to learn English as well.  I have come to realize that children only need an opportunity to be successful, and I hope to help provide more children with that opportunity.

My life has been difficult but I don’t feel like a victim because I know that everything in life has a purpose beyond our knowledge.  I thank God for all the blessings in my life.  I have a mother who has fought against adversity for my siblings and me, and Julie Coyne who gave me so many opportunities, support and advice.  Now I am applying to study in the United States, something I never would have imagined possible a few years ago.  I have a new life, a new hope for my future, and a new mission: to help other children achieve their dreams and potential as I have done.